The most famous pupil from the 19th century was Professor John Glaister of forensic medicine fame.

William Lithgow was born in Lanark in 1582. His father was a burgess of the town and his mother, Alison Graham came from a fairly wealthy Lanark family. Early in life William had his ears cut off by the brothers of a girl he was courting and was thereafter nicknamed ' Lugless Will'.

From an early age Lithgow was prone to wandering and first visited the Orkneys and Shetlands and later travelling farther afield to numerous countries in Europe. In 1632 he published ' The Total Discourse, of the Rare Adventures, and Painefull Peregrinations of long nineteen years Travayles. etc.' In it he describes his journeys through Europe, Asia and North Africa claiming to have walked 'thirty-six thousand and odde miles'. 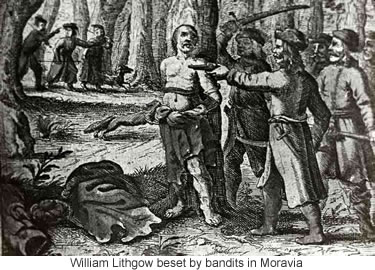 His last venture into Southern Europe ended when he was arrested and tortured on suspicion of being a spy by the Spanish Inquisition. He was later rescued by the English Ambassador and sent to London where the King paid for treatments to his injuries. Lithgow was again in trouble when he was jailed for an assault on the Spanish Ambassador.

His last accounts were on the sieges of the cities of Breda and Newcastle after which there is no evidence of his movements. Lithgow died after 1645 and local tradition states that he is buried in St. Kentigern's graveyard.

The illustration is from the Dutch translation of his work published in Amsterdam in 1652. 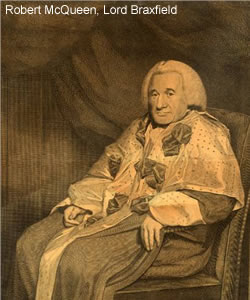 Robert McQueen the son of John McQueen of Braxfield, a small estate on the edge of Lanark, was born in Lanark in 1722. Educated at Lanark Grammar School and Edinburgh University he qualified in law in 1737.

McQueen became the foremost expert in Feudal Law in Scotland. By 1780 he was appointed Lord of Justiciary and became Lord Justice Clerk in 1788. In 1793/94 he presided at the trials for sedition of reformers such as Muir, Skirving and Margarot.

Lord Braxfield was one of the last Scottish judges to use the Scots tongue. This, his immense capacity for drink and his coarse manner in the courtroom resulted in a lasting reputation. On one occasion when a defendant remarked that Jesus was a reformer Braxfield replied 'Muckle he made o' that, he was hanget.' Braxfield died in 1799 and is buried in Lanark.

William Smellie was an eminent physician who is regarded today as the principal founder of the medical practice of gynaecology. William was born at Auchtyfardle on 5th February 1697, the only child of Archibald Smellie, a merchant and burgess of Lanark; and Sara Kennedy, a daughter of the Kennedys of Auchtyfardle near Lesmahagow. 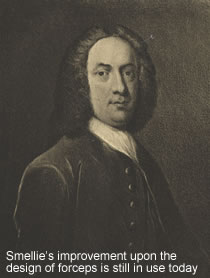 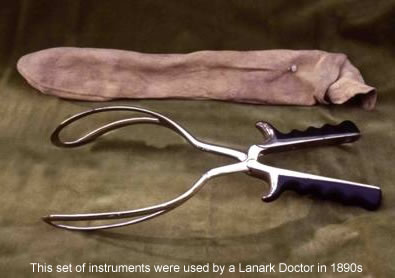 His family home was in the Bloomgate on the site of what is now the Bank of Scotland. He was educated at Lanark Grammar School, and in 1720 he started practice as a surgeon and apothecary in Lanark.

Four years later he married Eupham Boreland and in 1729 he was selected to represent the burgh as Lord Cornet.

Smellie became a member of the Faculty of Physicians and Surgeons in Glasgow in 1733. Six years later after studying midwifery in Paris for a short period he established a practice and pharmacy in London where he also studied midwifery for a time. He was dissatisfied by the level of knowledge in both cities and began to give obstetrical lectures and demonstrations to medical students and midwives in 1741.

These courses attracted large numbers of students and his teaching method was described as being “distinct, mechanical and unreserved”. Whilst in London he received his Medical Doctorate from the University of Glasgow in 1745.

Smellie’s practise flourished and became one of the largest in London. He continued his teaching and would deliver poor women free from charge if his students were allowed to attend the delivery. This practice established a trend toward the attendance of medically trained persons at childbirth. Over a period of 10 years Smellie gave 280 courses involving 900 students in the management of over 1,000 labours.

As an extension to his teaching Smellie started writing a series of books detailing his experiences in the practice of midwifery. The first (published in 1752) was the three volumes of “A Treatise on the Theory and Practice of Midwifery”. This was followed two years later by “A Collection of Cases and Observations in Midwifery” and “A Set of Anatomical Tables with Explanations”. In these books Smellie described more exactly than any previous writer the many medical aspects and problems encountered during childbirth.

In 1759 Smellie “retired” to Lanark and bought land at what was then known as Kingsmuir where he had a house built that became known as Smellom Hall – now Smyllum. He devoted his last years to completing his last book entitled “A Collection of Preternatural Cases and Observations on Midwifery” In this as with his earlier works he was assisted by his friend, a fellow doctor and writer Tobias Smollett. He also pursued his favourite pastimes which included painting, wood carving and his fondness of music. He played the violoncello, organ and flute.

Smellie did not live to see the publication of his last volume in 1764 as he died of “asthmas and lethargy” on 5th March 1763. He bequeathed his collection of books and musical instruments together with a sum of money for their upkeep to his old school. The books are still kept at the Lindsay Institute.

William Smellie’s modest and logical approach to learning is captured in this statement by him in 1741 – “When I first began to practice I determined to follow the method of three gentlemen (other experts in the field) but having by those means lost several children and sometimes the mother, I began to alter my opinion and consult my own reason.”

His own reason led him to do more to raise the knowledge and level of obstetric practice over the next 20 years than any other individual. His pioneering work in this field of medicine led to him being known as “The Master of British Midwifery.”

John Glaister was one of the pioneers of forensic science. Born in Lanark 9th March 1856 he was the eldest son of Joseph Glaister and Marion Weir. He was educated at Lanark Grammar School.

His parents wanted him to study law but, after their deaths when he was 15, he was sent to Glasgow University by his uncle to study medicine and completed the course in four years. His interest in forensics came after reading a report written by former pupil William Smellie, the 18th century obstetrician.

He was too young to sit the final exams so he took a diploma that allowed him to practice medicine until he was 21, when he could sit the degree exam. He later succeeded eminent surgeon Sir William Macewen in 1881 to become lecturer and, later, Professor in Medical Jurisprudence at the Royal Infirmary.

In 1899 Glaister became Professor of Forensic Medicine and Public Health at Glasgow University, where he oversaw the modernisation of the department, providing specialist laboratories.

He wrote the first edition of his Medical Jurisprudence in 1902, which is still a standard text today. His practical as well as a theoretical approach to forensics made him an expert witness in many criminal cases.

Glaister had a high public profile due to his regular and often dramatic appearances in court as an expert witness and titbits of his evidence were recorded faithfully in the sensational press. The novelist and lawyer Erle Stanley Gardner, author of the popular Perry Mason books, dedicated one of his novels 'The Case of the Horrified Heirs' to him.

Two John Glaisters, father and then son, between them, occupied the regius chair of forensic medicine at Glasgow University for over sixty years between 1899 and 1962.

The early use of entomology and study of maggots was pioneered in the department, and the ballistics work done there was also ahead of its time in reconstructing bullet wounds. Rather gruesomely, the Glaisters used real limbs for this, utilising amputated limbs of accident victims.

Both Glaisters were very influential professors and their students went on to found forensic medicine departments around the world.